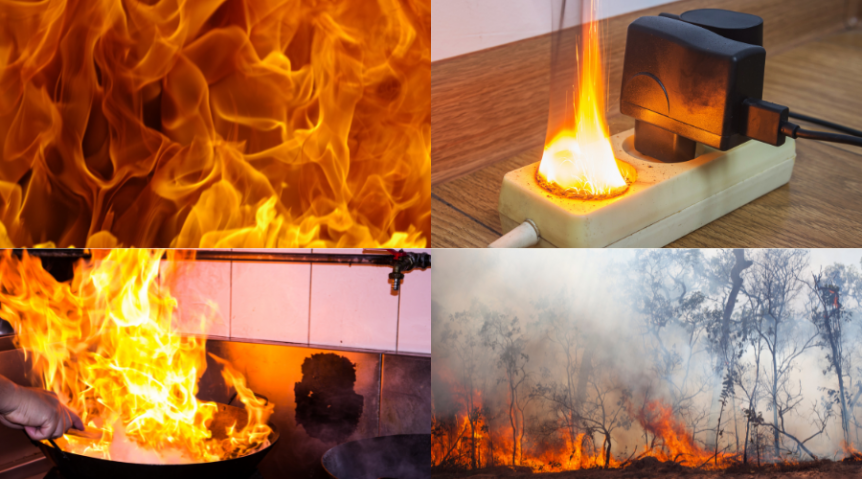 Home » Types of Fires and How to Extinguish Them

Fire is fire – and it needs to be extinguished to preserve the safety of the environment. Did you know, however, that there are at least five different types of fires? These classes of fires require specific handling to squash the flames. We’ll discuss the various kinds of fires that pop up and how to precisely put them out.

Fires are classed into certain categories and are based on the fire’s fuel source. Keep your home or business safe by keeping on hand the right types of equipment that are designed to put out specific types of fires.

The five common methods of extinguishing fires are cooling with water for Class A fires, smothering with a chemical for Class B fires, starving (cutting off the supply of oxygen) for class C fires, breaking the chain reaction of fire for Class D fires, and Chemical fire extinguishers for Class K fires.

How to distinguish fire?

Fire is a process that occurs when a material undergoes a chemical change due to heat. When this happens, fire can spread and become more intense. The key to identifying the difference between a fire and smoke is flame color. Red, orange, and yellow flames indicate that there are carbon compounds burning in the organic material. Blue flames indicate that something with high carbon content has caught on fire — such as oil or wax — but it does not necessarily mean that the flame has spread to other materials or will become more intense.

Fire classification is the process of determining the fire level, which is based on understanding the temperature and fuel in a given area. Fires are classified into four main levels: A, B, C, and D. A is the lowest and D is the highest. Using these classifications allows firefighters to know what equipment they will need to control the fire. Class K fire involves electrical equipment not associated with the generation, transmission, or distribution of electricity.

Fire can be distinguished from other light sources primarily by color, pattern, and movement. These three characteristics are briefly described in this section. Color: Characteristics of a fire such as its shape, color, and intensity can allow for the identification of the type of fuel (wood or coal) being consumed.

A wide variety of substances are used to extinguish different kinds of fires, from simple fuels like wood and paper to the more complex ones like petrol and other flammable liquids. Some common types of fire extinguishers include AFFF agent (Aqueous Film Forming Foam) – used on class A fires such as wood, paper, or fabric. BAFF (Bromotrifluoromethane) agent – similar to BFF or TFF agents but using fluoro ethane instead of trifluoroethane CO2 extinguisher (carbon dioxide) – used on class B flammable liquid fires with low levels of oxygen, such as petrol and diesel HEPA filter cartridge – an electrostatic precipitator used in non-pyrotechnic smoke hoods to protect from Flammable gas fires

Class A Fires – Extinguish with Water

The first type of fire is the class A fire. This type of fire ignites from common fuel sources, like wood, trash, fabric, paper, and plastics. Class A flames burst out accidentally. Trash and dumpster fires are prime examples of Class A fires. It is noteworthy to mention that dumpster and trash fires do not pose a hazard to anyone, except those trying to extinguish the flames. In a trash fire, valuables do not exist. As human life is the one element at risk, those attempting to put out the fire should take extreme precautions to protect themselves.

Extinguish a Class A fire with water or mono ammonium phosphate. Stream a continuous supply of water from the hose to put out the fire. Do not enter the dumpster, as the contents within are unknown. Combustible and hazardous materials may explode at any given time. If you detect or suspect the presence of hazardous materials within the trash, contact your local environmental specialist right away.

Water is an effective way to cool a fire because it allows a large amount of energy to be released from one area into another area that doesn’t provide any more heat. The transferred energy removes heat and prevents combustion.

Extinguishing fire by cooling is done when there is no need to remove fuel or oxygen. The only way to stop the heat release from a fire is to slow down the rate at which it releases energy. This can be done by adding water or another liquid that conducts heat, such as foam, to the burning material.

Water can be sprayed onto the burning fuel to cool it. By spraying a large volume of water onto the fuel, heat will be conducted away from the flame, reducing its temperature and thereby preventing combustion. Water cooling is not perfect because water vapor also produces some heat when it evaporates and there is a finite time delay between cooling and stopping the fire.

Water is by far the most widely useful fire extinguishing agent. It is widely available, inexpensive, and non-toxic, and it has a high latent heat of vaporization so it can absorb large amounts of energy without increasing temperature. Water extinguishes fires by absorbing heat from burning materials and restricting oxygen from reaching flames.

Class B fires are known to result from an explosion of flammable liquids or gases. Flammable liquids include petroleum-based oils or paint, tars, alcohol, oils, solvents, gasoline and kerosene. Flammable gases include butane and propane. Industries that frequently deal with flammable liquids and gases should take extra precaution to ensure the fluids, lubricants and paints they work with on a daily basis do not combust.

Never attempt to extinguish a Class B fire with water. Splashing water on a fire fueled by flammable liquids only splatters and spreads the flames, increasing the fire’s latitude. A better way to combust and extinguish a Class B fire is by removing oxygen from the environment, thus suffocating it. Preventing fresh air from reaching the seat of the fire is one method used to extinguish a fire. By shutting off fresh air and allowing the combustion to reduce the oxygen content in the confined atmosphere until it extinguishes itself, or by reducing oxygen flow over time until the fire extinguishes itself. 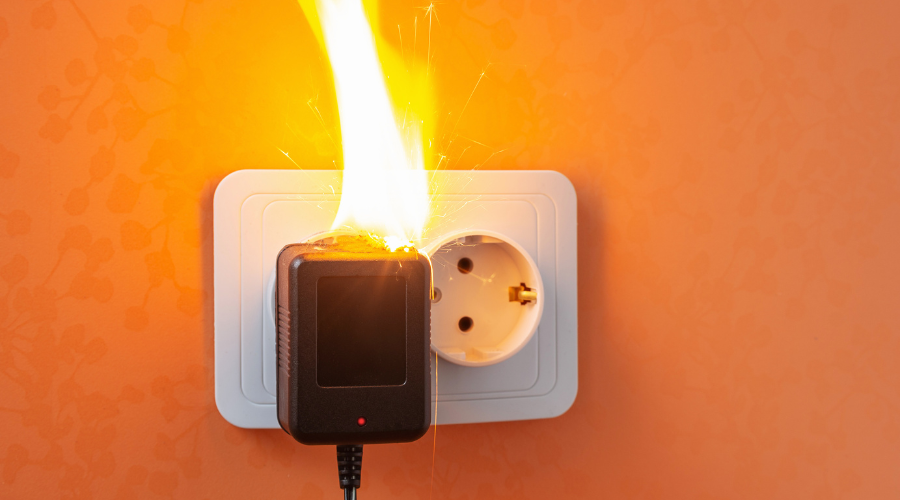 Industries that work with large-scale electrical power equipment may see Class C fires more frequently. Faulty wiring or an overburdened surge protector can spark a Class C fire in smaller businesses too. Homeowners should be careful, as well, since Class C fires can start from space heaters, faulty wiring inside the home, outdated appliances and lights.

Extinguish a Class C fire by shutting off the electrical power, which serves as the fuel source for the electrical fire. Non-conductive chemicals like carbon dioxide should also be used to suppress the flames.

Fire extinguishers are typically not the first line of defense against a fire. Fire extinguishers should be used to control fires only when other means of control, such as fire fighting foam, have been tried and failed. In some cases, a fire can be extinguished simply by removing the fuel source. Firefighters may do this by stopping the flow of liquid or gaseous fuel; removing solid fuel in the path of the fire; or allowing it to burn until all of the fuel is consumed.

Water should never be used to put out a Class D fire. The liquid only worsens the flames fueled by metal fires, since water burns when it comes into contact with specific metals. Dry power agents are advised as ideal extinguishers. Graphite powder, powdered copper and sodium chloride are recognized as effective dry powder agents. The heat absorption and the smothering effects of dry powder agents are suitable to extinguish a Class D fire.

Be aware that dry powder agents are entirely different from dry chemical agents. The latter should never be used to put out a flame, as it might intensify the fire. Dry powder should always be used to extinguish a Class D fire.

Dry powder, Bromochlorodifluoromethane (BCF), and other halon extinguishers terminate the chemical chain reaction of flammable liquid fires with a non-consumable, non-toxic, and environmentally safe agent. They do not leave any residue or damage your property. This is essential for preserving the value of expensive equipment, fixtures, wall coverings, and artwork. 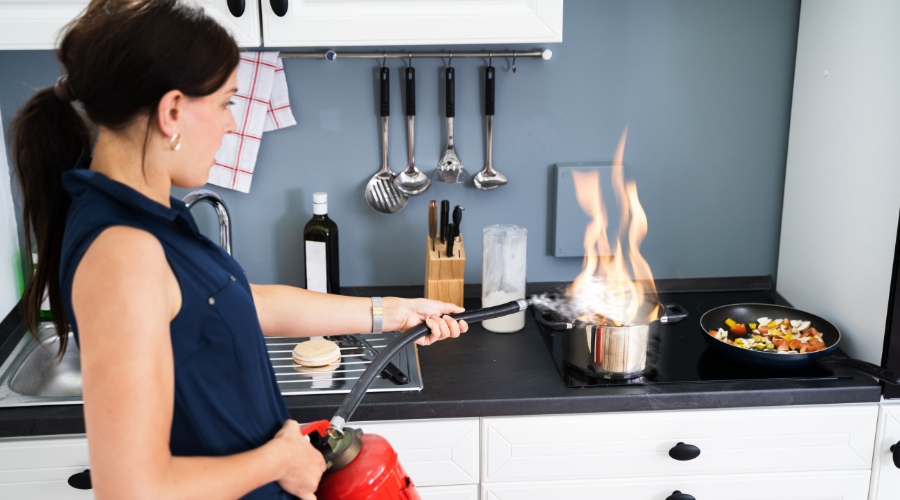 Commercial buildings and restaurants built with kitchens should be alert to the possibility of Class K fires. Residential homes should also be aware that a Class K fire can spark on the stovetop, oven, or grill, especially if grease splatters upon the heat source. Overheated foods in the microwave can also start a cooking fire.

Step 1: Do not try to move the chemical fire. It will spread if you allow it to move beyond its current location.

Step 2: Shut off any nearby sources of oxygen like a ventilation system or open window.

Step 3: Use water spray or foam on the source of fire to control the flames and stop the chemical reaction that is occurring.

ServiceMaster DRR reliably serves the San Francisco, CA community of residential homes and businesses 24 hours a day, 7 days a week. When any type of fire sparks, don’t hesitate to contact the area’s most trusted and responsive fire damage restoration professionals, ServiceMaster DRR, for a thorough cleanup and a full restoration of your property. 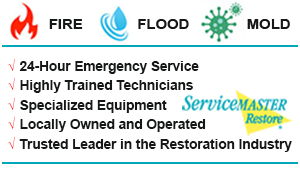